As of yesterdays nightly, Thunderbird has got an early version of a Gnomestripe theme. It now uses system icons for the folders and replaces the Mozilla themed icons with ones in Tango style, which make it look much more like a Gnome application. 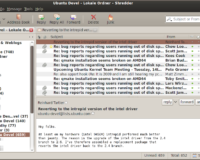 What is still missing though are the icons for the main toolbar and natively themed tabs, but I think we can expect these for the final release of Thunderbird3. Together with the nice interface improvements this will make Thunderbird a really great alternative to Evolution and hopefully make it also the default mail client for Karmic.