Although Google Earth is a native Linux application and even uses Qt it still looks like a Windows95 application – even in KDE. The problem is that Google Eerth ship its own Qt libraries instead of using the ones installed on the system and thus also does not respect the system settings.

But there is help! If you want to make it look native,  make

this will fore Googleearth use the system libraries instead, which include a GTK Qt Style. So if you launch googleearth as 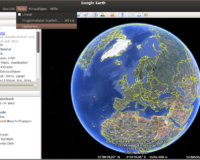 but this will only work on Jaunty, since the GTK Qt Style was just added in Qt 4.5. If you are still on Intrepid you can use

which will look at least familiar with the default Human Theme.