Just 3 years after Google first released their Jingle extension for Jabber which they used in their GTalk application it is finally possible to use it on the open source desktop too. This is just 2 years after Nokia released their Linux/ Gnome based N800 internet tablet, which also supported it.

But now Jaunty got an update to the Empathy Messanger, which brought Voice/ Video support to it. So now you can finally do calls between two Empathy Clients, between Empathy and GTalk on Windows and even between Empathy and your now actually useful N800 and that regardless whether you are on 32bit or on 64bit – only requiring a Jabber account – no need for Skype any more.

and here is the proof screenshot: 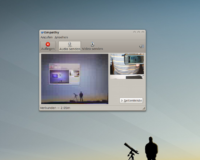