typically only the main system is running, that is the Linux Kernel, the launcher, the phone app etc.. If we talk about rooting, that means we want to add an additional app to the main system which has access to secured parts of the system and acts as a gatekeeper for other apps that also want to get access.

The problem is the secured parts of the system are locked down – otherwise they would not be secure. This means that we can not simply install that app (e.g. an apk) from within the main system.

The bootloader is a tiny piece of software which decides whether to start the recovery or the main system (or another main system, like Ubuntu Phone).
In the default configuration in only starts systems that it knows and trusts. In this configuration the bootloader is called locked.
Although this prevents malicious software to change the phone and spy on us, it also prevents us from replacing the recovery system. By the way, this concept is also coming to the PC where it is called UEFI secure-boot.

Here is a graphical overview of the Android components: 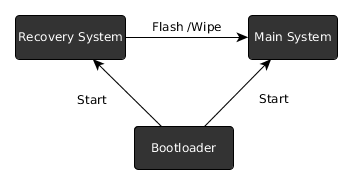 Note that unlocking the bootloader also allows attackers to circumvent any of the android security features (PIN etc). It becomes possible to access all the files on the device using a different recovery system. (unless userdata is encrypted)
Therefore android will wipe all userdata when the bootloader state is changed from locked to unlocked.

So if you lose your unlocked device or it gets stolen, you better hope the thief is not tech savvy.

The android-sdk-platform-tools-common package most importantly contains a whitelist (/lib/udev/rules.d/51-android.rules) with devices to which users can send commands over USB, so you do not have to run fastboot as root.

Now you have to reboot into fastboot mode. Usually there is a key combination you have to press on startup.

Remember this key combination as you will need some more times.

Samsung Devices however, like the Galaxy S3, do not support the fastboot mode – instead they have a download mode, which uses a proprietary Samsung protocol. To flash those you have to use the Heimdall tool. While this article does not cover the heimdall CLI calls, the general discussion still applies.

last warning: this will wipe all user data on the device

for google devices, like a Nexus 4 or Nexus 7 it is just do

if you have a Sony Xperia device, like a Xperia Z, you additionally have to request a unlock key and then do

where <KEY> is the key you obtained.

There are several superuser apps to choose from for Android 4 and below. However the only superuser app working on Android 5/ Lollipop and above is SuperSU by Chainfire.

As there are devices like the Nexus 5X shipping with Android 6/ Marshmallow, I will describe this method first.

Chainfire created an “installer” called AutoRoot that includes the fastboot utility and will perform the unlocking step described above. However if you have read this far, you probably also want to understand the rest of the process.

First you have to download the appropriate package for your device. There you will find a recovery image which we have start with

the command above will not flash anything on your device, but just upload the image and immediately start it. The image contains a script to modify the main system (change startup to get around SELinux) and install the superuser app.

If everything goes well, you can now just reboot your phone and you are done.

You could lock your bootloader again now to make your device more secure. However the next Android update will remove root again and repeating the rooting procedure will wipe userdata – so you have to balance security update vs. the risk of your device being stolen. For the latter case you still have the option to enable encryption of userdata though.

Android over the air (OTA) updates contain only the changes to the current system. In order to verify that the update succeeded Android computes a checksum of the patched system and reverts to the old state otherwise.

As SuperSU has changed the boot image to start itself, the updates obviously will fail. So to install an OTA update you will have to grab a factory image and restore the boot partition using the included boot.img

after this you will have to patch the boot partition again using the procedure described above.

Also note that if you use apps that change the system partition (like AdAway that changes the hosts file), you will have to revert those changes as well in order for the OTA update to succeed.

If you want some advanced features, like backing up all your installed apks, you can permanently replace the recovery image on your device. However this will most likely prevent you from installing OTA updates.
There are two prominent alternative recovery systems with the ability to install apps

Clock Work Mod has been discontinued, so we will use TWRP. From the Website linked above download the recovery image which fits your phone.

where <RECOVERY> is the name of the file you downloaded. For instance for a Nexus 9 and TWRP 3.2.3 it would be

If you have a Google Device, you can grab the factory images here.  There you will find a image of the stock recovery. You can restore it by

If you run a device with Android older than 5/ Lollipop you have some alternatives to SuperSU:

I would recommend getting Superuser by CWM, as it is open source and also nag-free as there is no “pro” version of it. There is even a pull-request which might make it also work with Android 5 in the future.

To install the app we need to get this zip archive and copy it to the device. Then we need to reboot into fastboot mode and then select “Recovery Mode” to get to the recovery system. Once in Recovery mode select

then browse and select the “superuser.zip” you just copied.

Once the system has started you should have a “Superuser” App on your device. Congratulations, you are done.