In case you have been holding back the update to oneiric until all programs are ported, you have now one reason less. Teatime has now peen ported to oneiric and is available in my PPA. 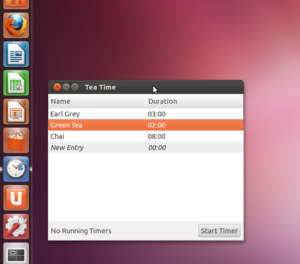 Maybe the most obvious change is that it now uses a different icon. The simple reason behind this is that the old one is no longer available in the oneiric icon set 😉

For the python developers among you

As python was already written using GObject introspection on Natty it automatically picked up GTK3 with Oneiric, so no porting was required here. Great news if you were afraid of the GTK2 to GTK3 transition.

But unfortunately the GIR python bindings are not as stable as I would like them to be. The code that worked flawlessly with Natty stopped working on Oneiric with some awkward error message. (I am still not sure whether GIR or GTK3 is to blame)